In the fairly recent NSW case of Morris v DECC,1 a commmercial shooter submitted that he had been pressured by landholders to shoot grey kangaroos although his licence was to shoot red kangaroos. His lawyer submitted that this was common. Sheahan J made a series of comments which provide some insight into the need for shooters to abide by their licence conditions to ensure the sustainability of the killing. These comments were:

In relation to the defendant's actions, Sheahan J stated:

Thomsen and Davies have written that shooters in South Australia regularly harvest from properties which they perceive to have the greatest kangaroo density and simply attach tags that have been issued for another property.3 Thomsen and Davies argue that this practice occurs so that harvesters may 'maintain good relationships with landholders and ensure continued access to land and to quota for their harvest activities.'4

The research of Thomsen and Davies suggests that there may be widespread breaches of the law in South Australia by shooters (and landholders) through killing kangaroos from areas that are not provided for in their licences. The case of Morris v DECC also indicates that shooters may be killing kangaroos of species that are different to those provided on their licence. 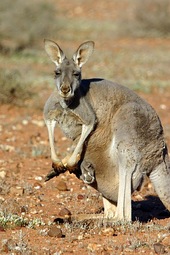