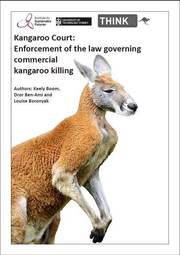 THINKK has released a new groundbreaking report entitled 'Kangaroo Court: Enforcement of the law governing kangaroo killing'. The report highlights weaknesses in the enforcement of the National Code of Practice for the Humane Shooting of Kangaroos and Wallabies, which establishes national standards for the killing of adult kangaroos and dependent young.

The report has uncovered a number of key findings, which are summarised below:

The report highlights a number of areas for legal and policy reform to improve animal welfare outcomes for kangaroos targeted by the commercial industry. The key recommendations include:

Back to all news