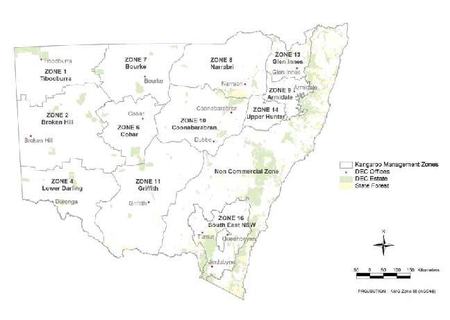 The quotas are derived through a variety of means. The most important of these are estimates of population size from aerial and ground surveys. However, other factor are population trends, climatic conditions (especially rainfall) and changes in harvest statistics (such as carcass weight and sex ratio).

In 2010, the harvest quota on the mainland has been set at just over 4 million.2 This represents about 14.9% (ranging from 10% - 20% depending on species and state) of the estimated populations of the four commercially harvested species.

To highlight the sustainability of current kangaroo killing, it is sometimes stated that the national quota is never met. That is, the sustainable yield is never reached so the level of killing must be sustainable. In 2001-2009, the total number of kangaroos harvested has been 64% of the total annual quota over that period. However, this generalised statement fails to recognise that the quota is often met and sometimes exceeded in the smaller zones. For example, the quotas for eastern grey kangaroos in the Upper Hunter, NSW, and for red kangaroos in Bourke, NSW, were exceeded in 2006.3  In addition, the quota numbers and population estimates do not take into account the killing of young and the non-commercial killing.4

NSW and South Australia also have a 'special quota' which may be utilised where a management zone's harvest quota has been reached. In these instances, additional kangaroos may be shot for commercial purposes where there is 'a continuing damage mitigation need.'5 The South Australian special quota (all three harvested species) is 9,500 and the NSW special quota is 117,550.

Although the harvesting industry is regulated by the quota, it is impossible to actually verify the number of kangaroos that are body shot and there is no accurate cumulative count on the joeys killed. Combined with the impact of climate change and other stresses on wildlife, this situation could lead to population crashes of certain species in certain areas.

4. NSW Young Lawyers Animal Law Committee, 'A submission to the NRMMC Working Group on the draft National Code of Practice for the Humane Shooting of Kangaroos and Wallabies' (prepared by Amber Hall, John Mancy, Eve McWilliams and Angela Radich), March 2008, 5.