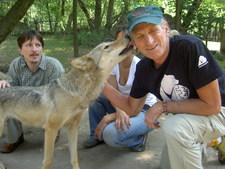 Marc Bekoff is Emeritus Professor of Ecology and Evolutionary Biology at the University of Colorado and a former Guggenheim Fellow. He has published more than 500 scientific and popular essays and twenty three books. In his latest book Ignoring Nature No More: The Case for Compassionate Conservation he collaborated with Dr Daniel Ramp who provided the Australasian perspective on Compassionate Conservation. In 2009, he was presented with the Saint Francis of Assisi Award by the Auckland (New Zealand) Society for the Prevention of Cruelty to Animals (SPCA). In 2005, Marc was presented with The Bank One Faculty Community Service Award for the work he has done with children, senior citizens, and prisoners as part of the Jane Goodall's Roots & Shoots program. In 2000, he was awarded the Exemplar Award for the Animal Behavior Society for major long-term contributions to the field of animal behaviour.